Gulf announced 100 scholarship recipients of the new Gulf platform, “The future is ours” 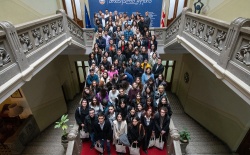 On November 7, a presentation of Petrocas Energy Group and the new Gulf platform "The future is ours" was held in the National Library. The Gulf Scholarship Program was created within the initiative, in order to support students, based on the results of the unified national exams, the top 100 freshmen students will receive a monthly scholarship of 300 GEL.

In addition, with the support of the Gulf company and at the initiative of the Arveladze Foundation 12 first-year students with the best grades were selected from all the regions of Georgia for a surprise reward; on November 10-13, they will go to Naples, Italy, where they will support Khvicha Kvaratskhelia at the Napoli-Udinese game at Maradona stadium.

"The future is ours" is a new platform of the Group, which combines all the main directions of social projects in the organization, including: promotion of education among the younger generation, popularization of sports, support of Georgian culture and charity.

The event was attended by the Managing Partner and the CEO of Petrocas Energy Group Vano Nakaidze, the ambassador of the United States of America Kelly Degnan, the Deputy Ministry of Education Nunu Mitskevitch, the CEO of Gulf Georgia Craig Kramer, the representatives of media and other organizations.