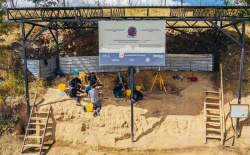 The first archaeological excavations in the territory of Orozman were carried out in 2021, during which stone tools made by the ancient inhabitants of Eurasia (Homo erectus) and the remains of extinct animals were discovered.
During the 2022 archaeological campaign, the Orozman International Archaeological Expedition discovered an early Homo mandibular tooth, the 4th premolar, in layers dated 1.8 million years ago. The discovery of Orozman is of world importance and, together with Dmani, it represents the center of the oldest distribution of the oldest human or early (Homo) in the world outside of Africa!
Archaeological works are being carried out with the support of Gulf.